With the growth of the world’s population and ever-increasing demand for energy, it is vital that we minimize release of CO2 into the atmosphere. Renewable energy technologies such as solar, wind and geothermal will play an important role, but there are challenges aligning the times of peak energy demand with renewable power production. Fossil fuels will continue to be used for decades to come, especially in rapidly-growing regions of the world. It is in everyone’s best interest to use those limited resources as efficiently as possible, and to keep resulting CO2 from entering the atmosphere. Ideally, we would figure out a way to produce energy while removing CO2 from the atmosphere at large scale. In fact there is a perfectly realizable way to do that.

Over the past few decades, there has been a lot of R&D focus on carbon capture from coal-fired power plants. The U.S. Department of Energy and other international organizations have invested a lot in development of technologies such as integrated gasification combined-cycle (IGCC) systems, oxy-fuel combustion and chemical looping combustion. We work with all those technologies at both lab and pilot scale.

Carbon-negative energy production:  Although the investment and focus has been on minimizing CO2 emissions from fossil fuel-fired plants, the carbon capture technologies can equally as well be applied to power plants utilizing waste biomass. That configuration, so-called BECCS (biomass energy carbon capture and storage), allows for large-scale negative CO2 emissions, i.e. removal of CO2 from the atmosphere by (1) growing biomass, which absorbs CO2, (2) using the biomass to create electric power through combustion or gasification using one of the technologies listed above, (3) capturing and permanently storing the resultant CO2. As new biomass grows, the cycle continues. It is worth emphasizing that the biomass will not be pristine old-growth forest. Rather, one would use waste biomass such as stumps and branches from logging, agricultural waste such as corn stover*, municipal yard waste, construction waste, and the combustible portion of municipal solid waste. The figure below depicts carbon pathways for different energy production technologies. The fourth approach facilitates carbon-negative energy production. 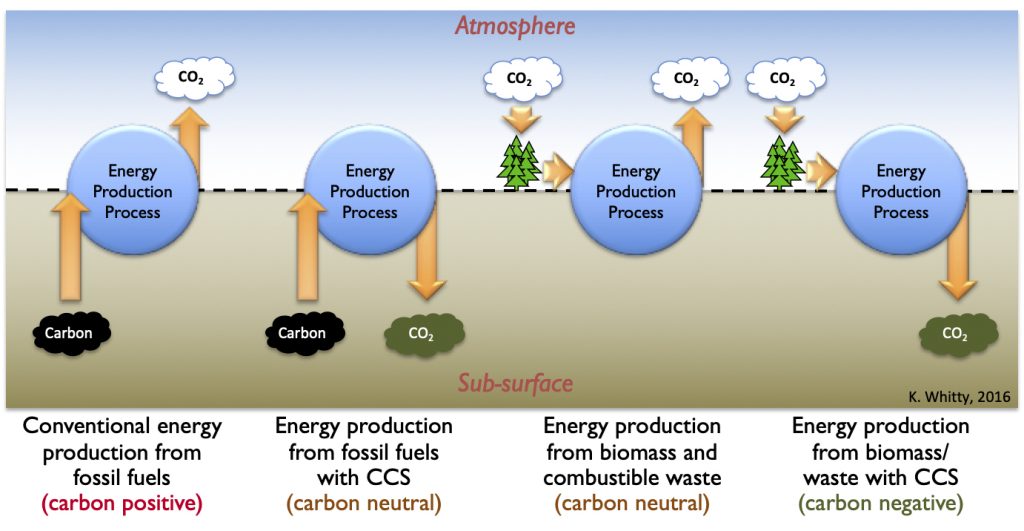